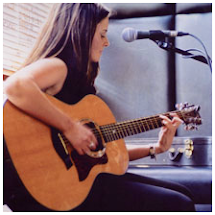 Jill was ‘allowed’ her first guitar at the age of 9 after 4 long years of pestering her dad. His attempts to pacify this during this time was a guitar made of cardboard with elastic bands for strings!!! Jill says “Every time I saw a guitar, I’d become mesmerised by it...I wanted one badly! Nothing else would do!” A 2nd hand guitar was finally purchased for £20 and classical guitar lessons were taken at school.

At the age of 13 Jill started to ‘get up and sing’ at the Watermill Folk Club in the yorkshire dales where the family had a static caravan. The weekends here turned out to be of great experience and the start of a long career in music. Early on, she met bands like ‘The Prelude’ (of ‘After The Goldrush’ fame) and they encouraged Jill to play during their gigs (even though she was covering a lot of their songs!).

After a short stint in a clothing store Jill went ‘pro’ and sailed away into the sunset with a seven piece band for 3 months and remained in bands for the next 6 years - gaining experience and traveling all over Europe.

Eventually she’d had enough and wanted to explore the new ‘Unplugged and Acoustic’ scene that was taking off and so she returned to her roots of simply acoustic guitar and vocals. Jill says, “I am a huge fan of Richard Thompson (Fairport Convention fame) and love his song writing, not to mention the fantastic band he plays with, especially the wonderful Danny Thompson (no relation) on bass!”